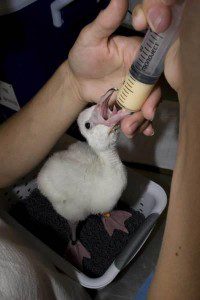 Species that rarely mate while on exhibit get the privacy they need thanks to the new Avian Propagation Center. It also offers the zoo an opportunity to increase the number of birds in its collection. The center is one of the largest, if not the largest, propagation centers in the nation.

The center is open to the public only for tours, but an interpretive pathway winds along two sides, providing visitors with glimpses of the birds in the outdoor areas of their cages and signs explaining the facility’s operation.

Of the zoo’s more than 200 species, 37 will be housed at the new center, including: